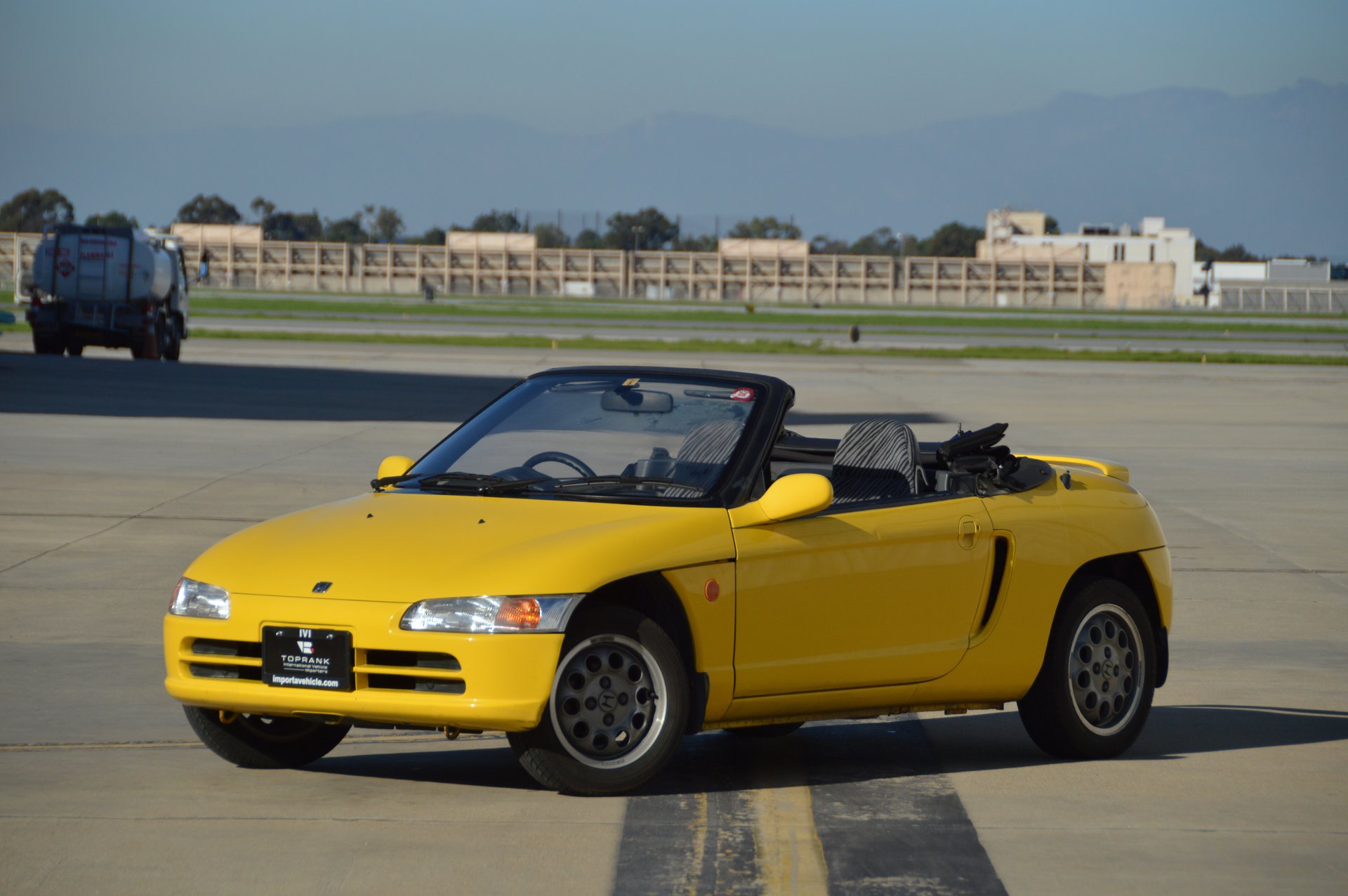 The Honda Beat is a rear wheel drive, mid-engined two-seat roadster kei car produced from May 1991 to February 1996. The Beat was the last car to be approved by Soichiro Honda before he died in 1991. The total number of cars produced was around 33,600. Most of the production (around two-thirds) occurred in the first year, and then production and sales fell drastically. The design of the car originated from Pininfarina, who then sold the design plan to Honda. The Beat was one of many cars designed to take advantage of Japan's tax-efficient kei car class.2

There were two mainstream models of the Beat (the PP1–100 and the PP1–110) and a couple of limited edition versions. Variations on the first model were just cosmetic updates. Only the second model had any real mechanical differences. All cars were offered with the option of a driver's side airbag. The car was sold exclusively in Japan at Honda Primodealership sales channels.

In typical Honda fashion, the Beat's engine did not utilize a turbocharger or supercharger. The 656 cc (40.0 cu in) engine was modified with the MTREC (Multi Throttle Responsive Engine Control) system, with individual throttle bodies for each of the three cylinders, to produce 64 PS (63 bhp) at 8100 rpm with an electronically limited top speed of 135 km/h (84 mph).

Financing Available. Please contact us for details. 844-523-2233 or sales@importavehicle.com

All vehicles are As/Is No warranty. These vehicles can not be registered in California until brought into California compliance. Please check all local laws for information on title and registration.

International Vehicle Importers sells in stock, landed, inspected cars over 25 years old at our dealership in California. We also provide the most informed and reliable importing service of Japanese (JDM) import cars, or other foreign automobiles over 25 years old, Show or Display, and race cars to the USA. In addition to importation, we can bring direct import vehicles into California Air Resources Board (CARB) requirements.

With our knowledge of the import process and access to over 150,000 vehicles at auction, dealerships, and private sellers each week; we are able to source the car of both our customer's needs, and dreams. We ensure you won't have to worry about side-stepped regulations, improper paperwork, or unnecessary risks - we will only assist in the import of vehicles that have been deemed legal for road use in the USA, or exempt from requirements.

Find Your Car - Looking for a car we don't have in stock? Looking at a car that will be legal in the future? We can help you find, buy, and legally import a vehicle to the USA. From Japan, to Australia, New Zealand, Europe, or anywhere else in the world. Fill out the form here. http://www.importavehicle.com/find-your-vehicle

NHTSA. Importing a vehicle that is at least 25 years old.

A motor vehicle that is at least 25 years old can be lawfully imported into the U.S. without regard to whether it complies with all applicable FMVSS.

Right Hand Drive -http://www.gtrusablog.com/2014/04/is-it-legal-to-drive-right-hand-drive.html In order to be lawfully manufactured or imported for sale in the U.S., a motor vehicle must comply with all applicable FMVSS issued by NHTSA. It is possible for a right-hand drive (RHD) vehicle to be manufactured in compliance with the FMVSS.

Direct Import (or Gray Market) vehicles are vehicles that were manufactured outside the United States for which the original manufacturer did not obtain California or Federal certification(1975 or newer vehicles). The EPA normally covers direct import vehicles under the ICI program, but if a vehicle is going to be registered in California, it needs to meet the California Direct Import requirements.

California has its own EPA called the ARB. Direct Import(or Gray Market) vehicles are vehicles, 1975 or newer, that were manufactured outside the United States for which the original manufacturer did not obtain California or Federal certification.

1974 or older exempt from smog

1967 or older are exempt from testing/import requirements

Are you looking for a R34 Nissan Skyline GT-R For Sale In the USA? We are legally allowed to import 1999 Nissan Skyline GT-R Vspec- Early Edition, under the Show or Display exemption. >http://www.importavehicle.com/vehicles/19/1999-nissan-skyline-gt-r