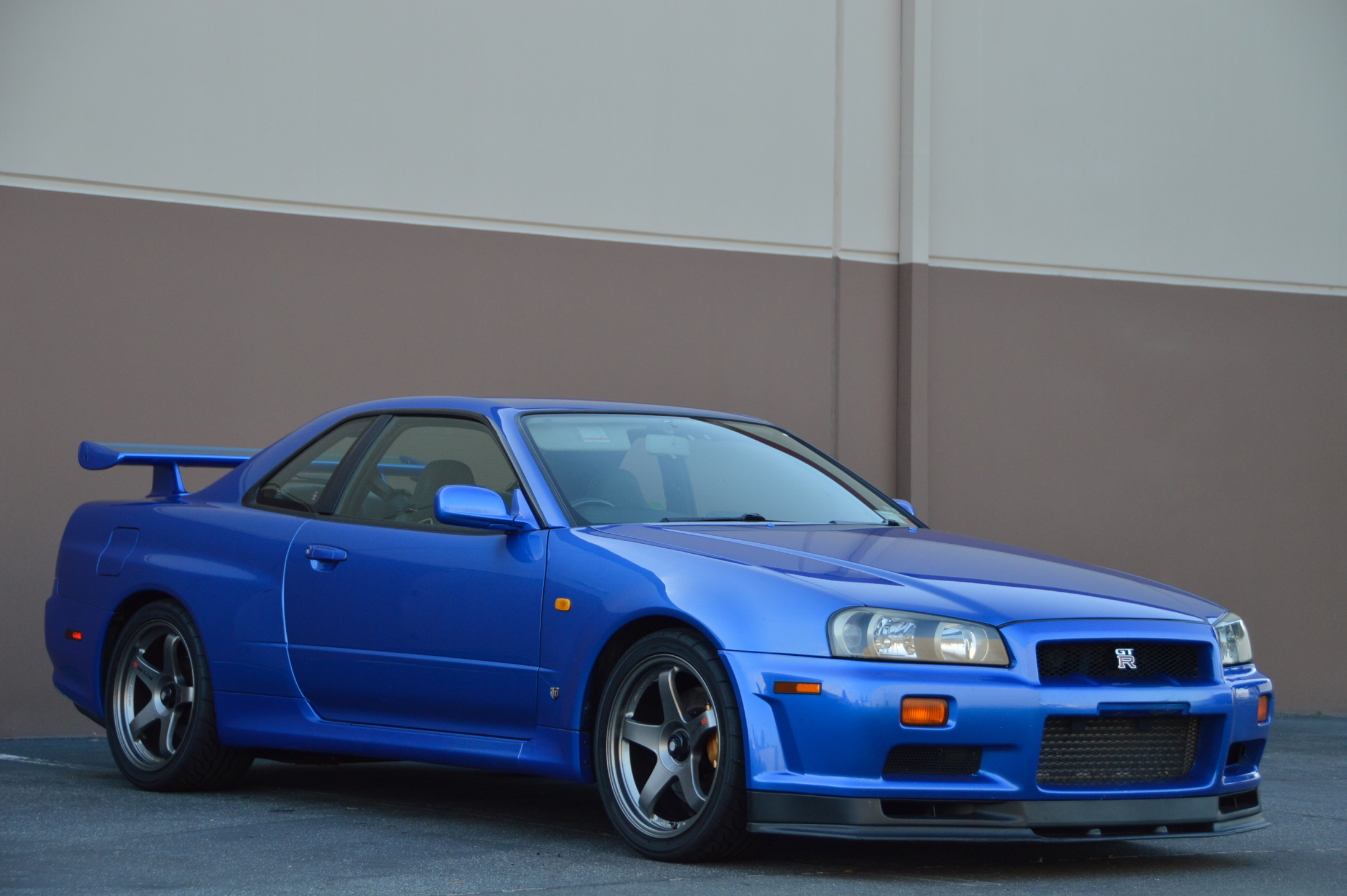 How to buy and store a R34 Nissan Skyline GT-R

The R34 is a evolution of the R32 Nissan Skyline GT-R, not a revolution. It is a refinement on what the R32 GT-R set out as a base car. The overall layout of the car, the tech, even many of the mounting points of major components are in the same location.  The R32, R33 and R34 GT-R all used the RB26dett. That is a 2568cc, twin turbocharged, inline 6 cylinder engine. Iron block, girdled main caps, oil squirters, oil cooling channels in the pistons. Aluminum head, indivdual throttle bodies, coil on plug. For 1989 this was pretty crazy tech. By 2002, the old RB26 was a bit long in the tooth. The emissions sucked, no OBD II system existed, and the emissions laws effectively killed nearly all the "old school" cars in 2002. Supra, Z, RX-7, S15, and R34. We are asked to speculate on pricing in 2024. Currently (Feb 2021) normal R34 GT-R in decent shape sell for around $115k in Japan. Special versions, low km versions, can get much, much more than that ($300k+).  Storage costs vary on inside vs outside, maintenace, and registration.  In 2024, we speculate that the most normal, plain versions will trade hands for over $200k USD.  The Show or Display legal R34, and MotoRex R34 already trade hands for more than that. 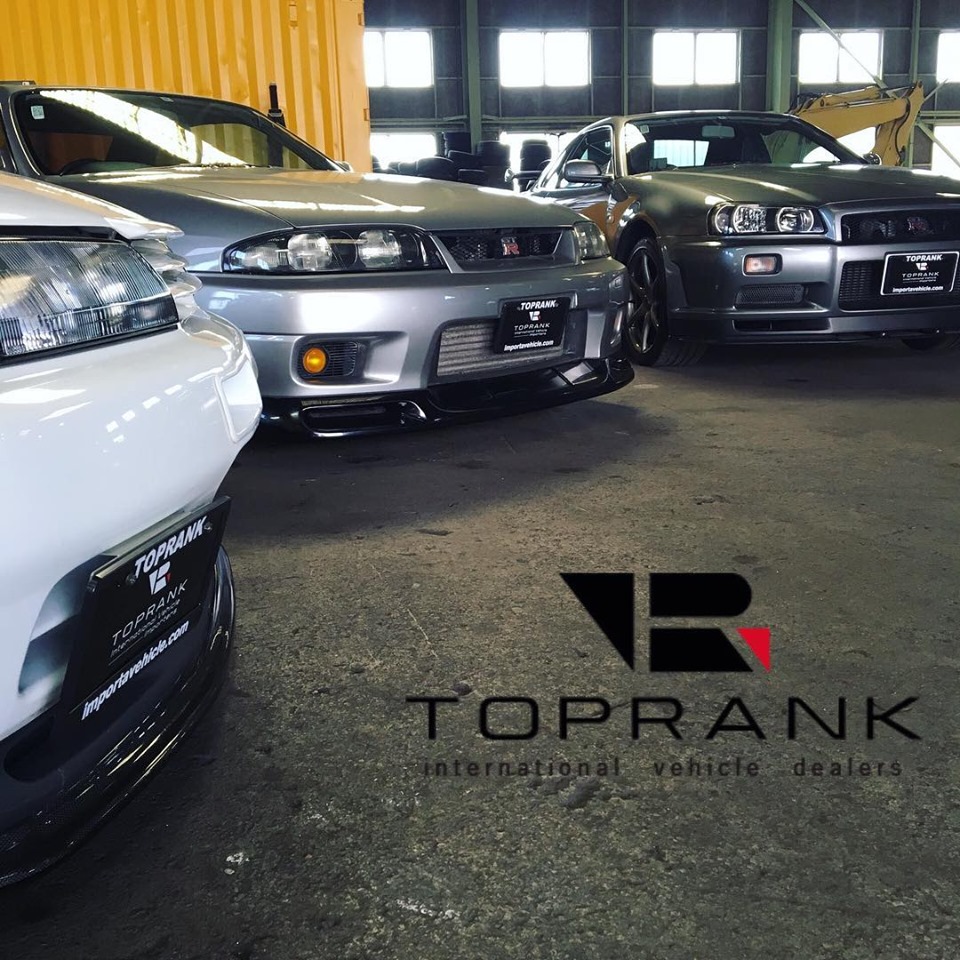 Under 49 U.S.C. § 30112(a), a person may not permanently import into the United States a motor vehicle manufactured after the date that an applicable Federal motor vehicle safety standard (FMVSS) takes effect unless the vehicle complies with the standard and is so certified by its original manufacturer. This prohibition applies to both new and used motor vehicles, but does not apply to motor vehicles that are at least 25 years old (based on the month and year of manufacture).

So there are a few legal ways to import vehicles to the United States, and a lot of illegal ways to smuggle in cars. To start with the illegal ways, we have heard every story in the book. People doing illegal things, want to try and misdirect, lie, falsify information, anything to scam someone out of money.  Some buyers are aware, some claim they are victims.  We believe that any buyer should be informed about what they are buying, and they should be prepare for any consequences of owning an illegally imported vehicle. If there are any concerns that a vehicle is being falsely represented, there are resources available to check on the vailidity of claims. The first being the NHTSA at (202)366-5291.  https://www.nhtsa.gov/importing-vehicle  For the R34, there were about 15 vehicles imported and legalized by MotoRex. Each of these vehicles has what is called a Bond Release. A copy of that letter can be obtained from the NHTSA. We have seen fake bond releases, so calling and checking may save you a huge amount of money and time.  There are several legal race cars here in the US. A couple of ex JGTC - now Super GT R34 GT-Rs. There are also several ex Super Taikyu R34 GT-Rs.  All of these vehicles were legally imported, and have the documentation to back up this legal import. A car you illegally import and race without NHTSA and EPA approval, is an illegal car. Saying it is a race car, doesn't make it legal. 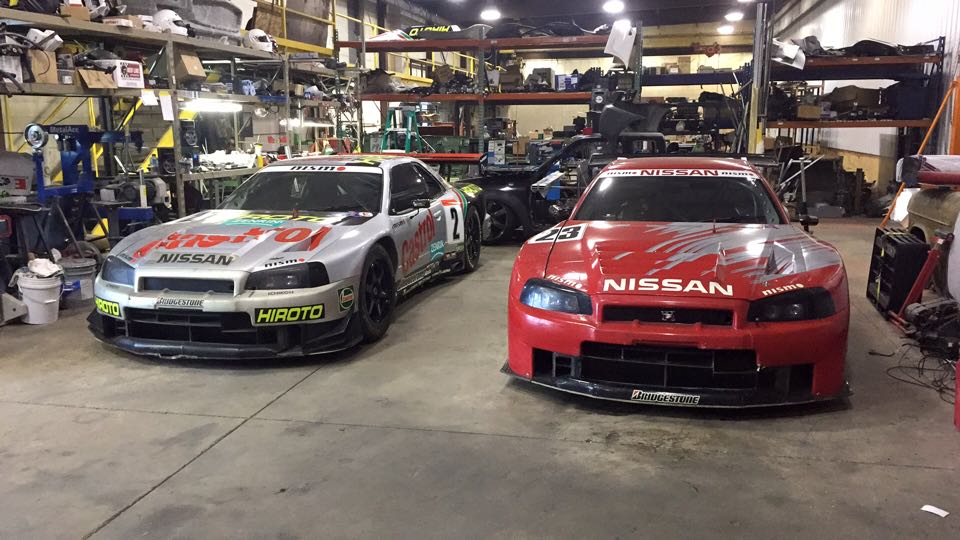 Then there are Show or Display legal R34 GT-R.  The NHTSA has approved two versions of the R34 GT-R for Show or Display. The first one is the 1999 Nissan Skyline GT-R Vspec (early edition) or Midnight Purple II.  282 cars made.  Now over 21 years old and EPA exempt. Just because the Midnight Purple II is approved, that does not mean that Midnight Purple III has been approved. A MNP3 vehicle has not been Show or Display approved, and was not properly imported. Some people are misguided by others that will try and scam people out of money, on the basis that no one has been caught, "recently". Don't get trapped by scammers. Read the rules and regulations, ask the authorities if there are any questions.  If you think you are immune, then you tread at your own risk.   The next approved version of the 2002 R34 GT-R is the Mspec Nur. 285 Mspec Nur.  The issue with this car is EPA. Since it is newer than 21 years old it is not exempt. However we do know a person that got a very limited, very restricted EPA exemption to import a Mspec Nur. There is a legal path if you are willing to put in the effort. If you think it is difficult to do it legally, wait until you are caught with an illegal car, like Kaizo. 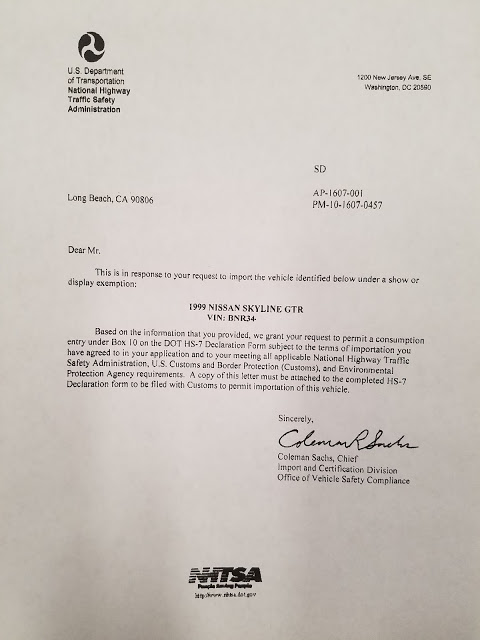 There were a number of different versions, and special models of the R34 GT-R. Some are more rare and desireable than others.  People in the United States need to realize that there are cars in Japan, Australia, New Zealand, and England that may never leave those countries. The owners will have them forever. There are cars that are very difficult, or near impossible to obtain.  When you have a worldwide desireability for a vehicle, and only 11,578 built, demand is going to exceed supply. Figure the first cars are over 21 years old now, many have been destroyed over the years. The actual number of cars available for sale is pretty low.

GT-R registry has a great amount of information about the R34 version of the Nissan Skyline. You can find out everything from the Nismo Z-tune, of which only 19 were built, to the cost to have Nismo Omori Factory refresh your R34 as a Clubman Race Spec or CRS. 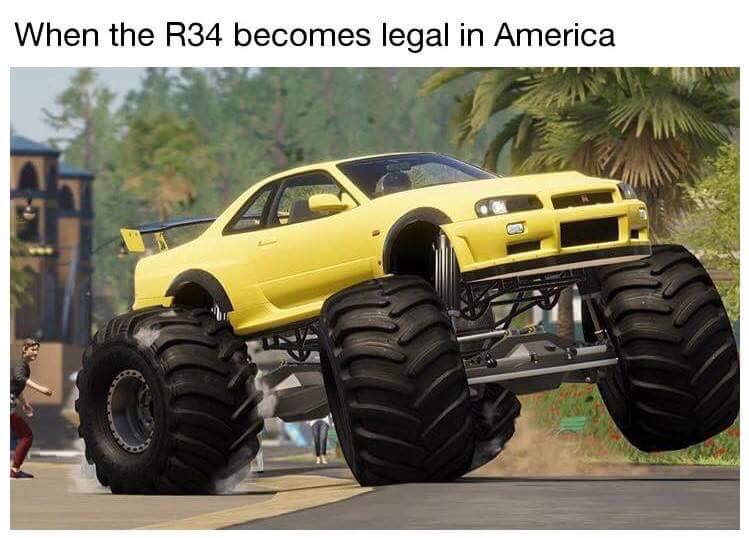 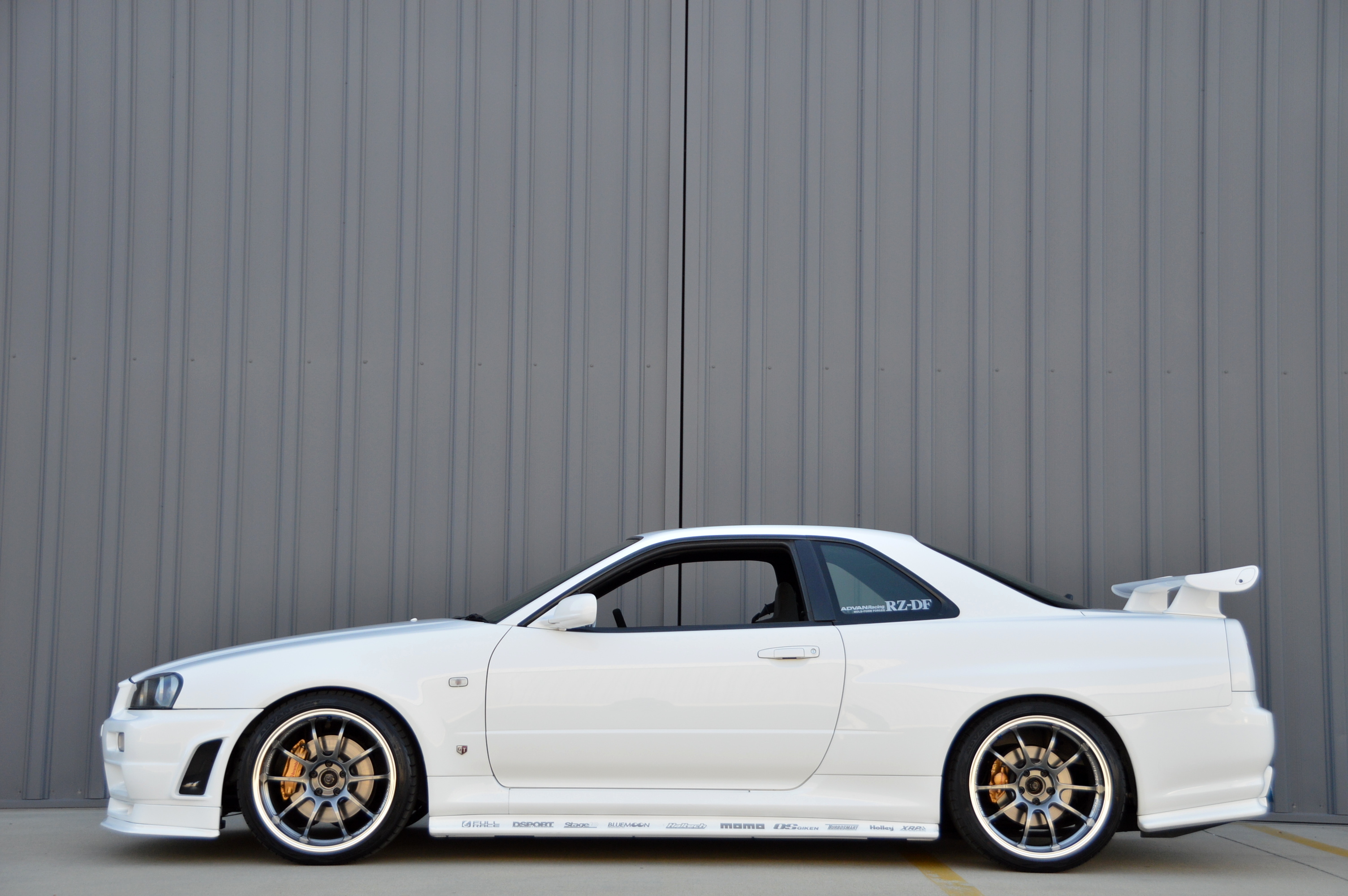 The campaign color of the R34 Skyline GT-R was the popular TV2 - Bayside Blue. Its named Bayside, for the popular roads near the bayside of Tokyo. However the most popular color was QM1, white.

Why is the color called Midnight purple? Check the link out for the most likely answer. 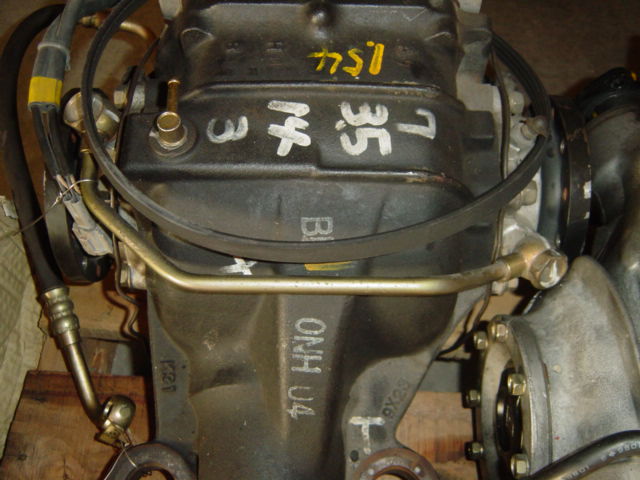 The R34 GT-R got an upgraded ATTESA, or all wheel drive system.  The R32 system worked well for the time, but it was refined in the normal R33 GT-R, further refinded with an active LSD on in the Vspec R33.  The R34 GT-R did even further improvements in the ATTESA system. ETS-Pro.  Some more information here. ETS Pro hydraulic diagram

RB26DETT Information
ATTESA Information
The R34 GT-R has aluminum hood and fenders, except on the Vspec II, which had the first mass production carbon fiber hood. That hood also had a NACA duct in it, to help direct air to the rear turbo, to cool it. If you look at the hood, there are provisions in it for it to fail in a front impact.  Cool technology for a factory car starting in 2000.  The plastics, and dissimilar metals mean that the factory paint doesn't always match 100% to the eye. We have seen a ton of these cars, and it is the way they were built.  The surround around the taillights, the rear bumper, the trunk often seem off just about 1/2 a shade. 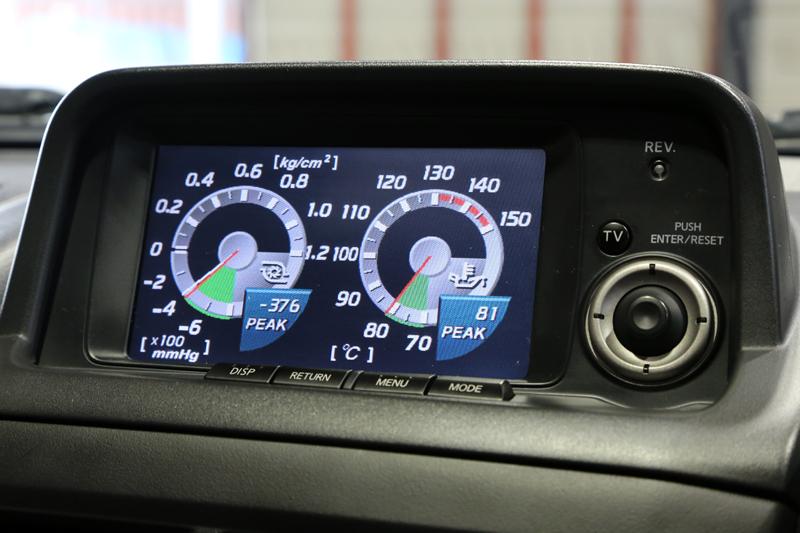 The MFD displays often crack and go bad.  Nearly every recent R34 we have seen, has a bad MFD.  However there are replacements available. There are two different normal screens.  So make sure you know what you have. ~$300 http://bit.ly/R34-MFD
Getrag. The R34 Transmission. The V160  6 speed. The Getrag is similar to the transmission used in the MK IV Toyota Supra. The input shaft and main shaft are unique to the GT-R on both transmissions, the rest of the internal parts are interchangeable. The Getrag is loud at idle. The synchros aren't that durable. Even though the Supra guys run them pretty hard, we break weird hard parts in them. All wheel drive can put a hurting on a transmission.  The prices for the Getrag are getting up over 10k a trans. With the parts gettting harder and harder to get, a sequential almost starts to look appealing. http://bit.ly/V160-R34 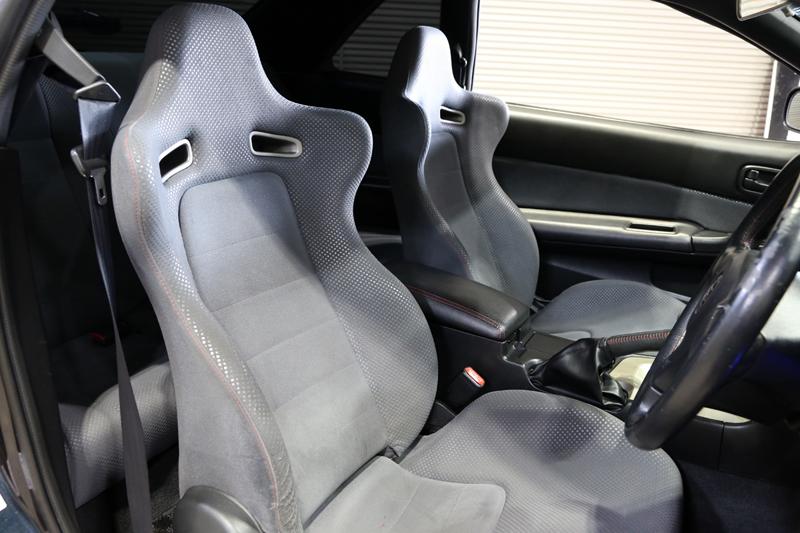 Seats.  The stock early seats are grey.  They are a great seat. High bolsters, special fabric with grip spots on it. The later seats are black. Both seats are highly desired, with the later seats being even more sought after. The bolsters wear like the R32 and R33 before it. As far as we know, the fabric is not available.  The current prices seem to be $5k-$10k for a set of black ones. The seats fit R32, R33, and R34 GT-R, and all the S chassis with minor modifications. http://bit.ly/R34seats
Jack points and rust.  Like the R32, and R33. It is easy for someone to jack an R34 incorrectly, and damage the side sills or pinch welds. This can also be a ripe area for rust. So check them.  Cheaper cars will probably be damaged here. More expensive nicer cars, should have good pinch welds. 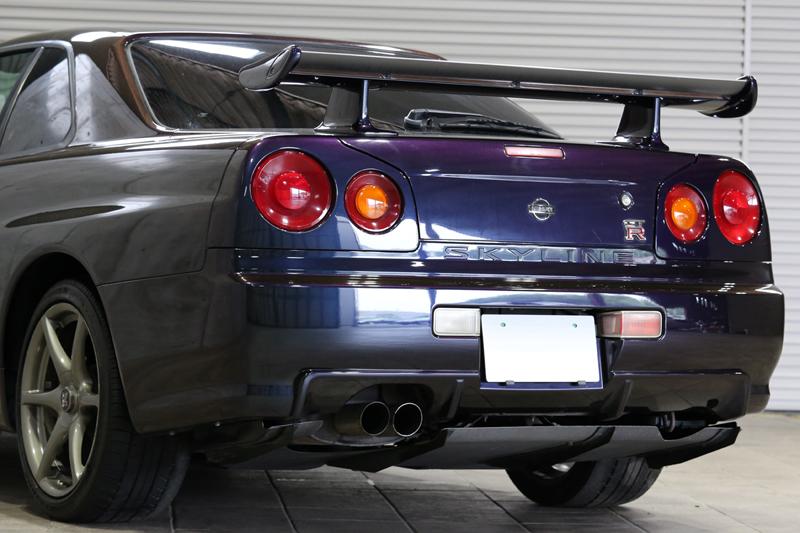 The Vspec version of the R34 got addtional aero that the non Vspec did not. The rear diffuser is carbon fiber, large difficult to ship, and expensive. There is a jack point on the oem vspec diffuser.  The front lower lip on these cars is plastic and hollow. It is often split. It is not an expensive part, and we consider it to be sacrificial.
Back to Blog
Privacy Policy Terms and Conditions
Powered by SpeedDigital