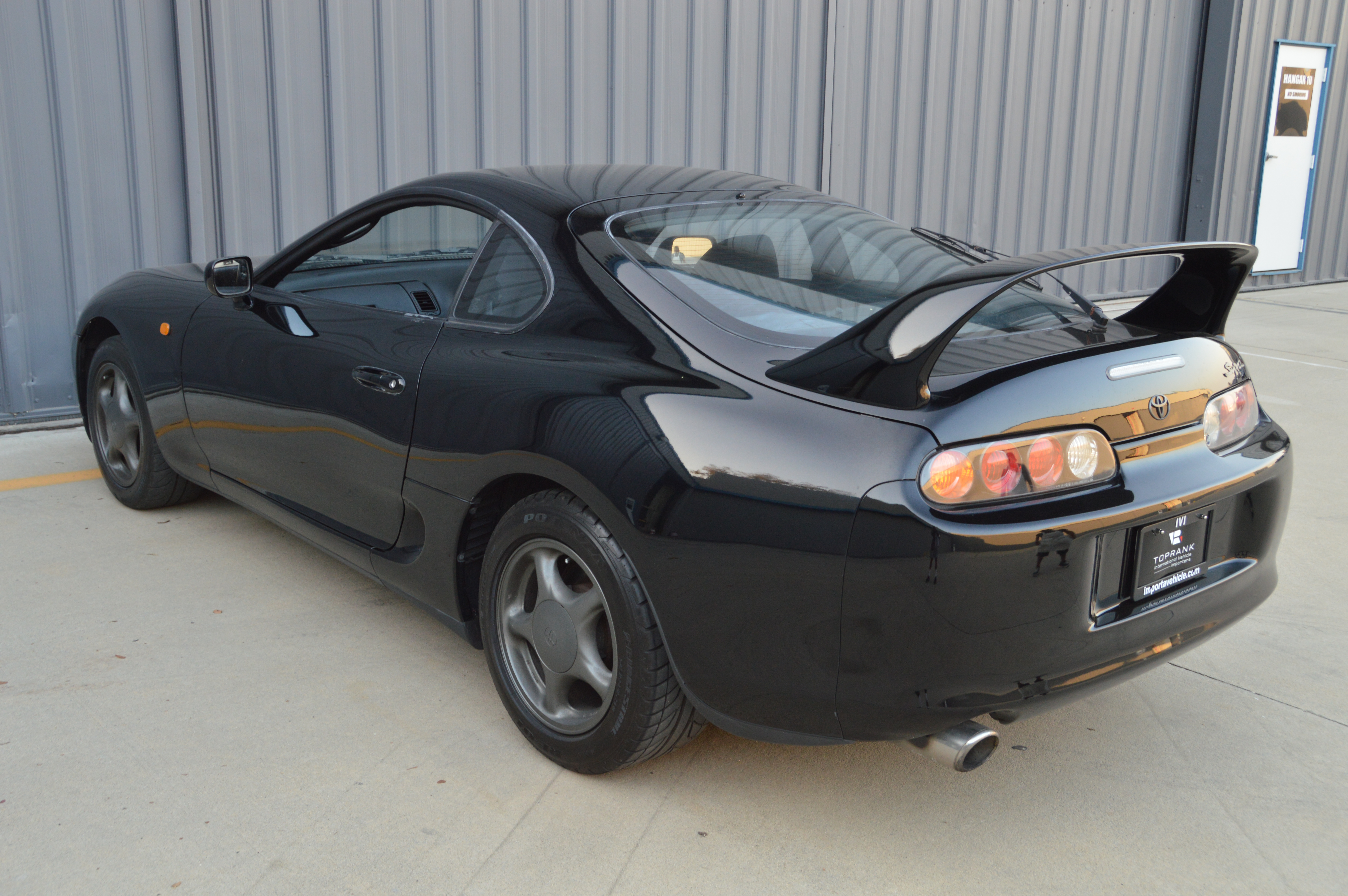 The MKIV or A80 Toyota Supra was sold in the USA from 1993 to 1998. In Japan it was sold from 1993 to 2002.  The legendary 2JZ powered the car in normally aspirated and twin turbo forms. Manual and automatic transmissions were available. The basic differences in the USDM and JDM car are : Turbos and fuel system. The Japanese car was rated at 280 hp where the US model was rated at 320 hp.  Read more below:

Toyota Supra online service manual from Hue 360. This manual is searchable and online.
http://www.toyodiy.com/ - ToyoDIY.com is a website dedicated to Toyota, Lexus and Scion enthusiasts and home mechanics. This site is the centralized repository for answers to all your car-related questions, such as repair procedures of various levels of difficulty (from an oil change to transmission swaps), modifications (also known as "mods"), general information, part information and much more.
MKIV.com

The A80 program began in February 1989 under various teams for design, product planning, and engineering. By the middle of 1990, a final A80 design concept from Toyota Technical Centre Aichi was approved and frozen for production in late 1990. The first test mules were hand-built in A70 bodies during late 1990, followed by the first A80 prototypes being hand-assembled in 1991. Again using subframe, suspension, and drivetrain assemblies from the Z30 Soarer (Lexus SC300/400), test model pre-production started in December 1992 with 20 models,[16] and official mass production began in April 1993.[16] This redesign saw Toyota placing great emphasis on a more serious high-performance car. The new Supra was completely redesigned, with rounded body styling and featured two new engines: a naturally aspirated Toyota 2JZ-GE producing 220 hp (164 kW; 223 PS) at 5800 rpm and 210 lb·ft (280 N·m) at 4800 rpm of torque and a twin turbocharged Toyota 2JZ-GTE making 276 hp (206 kW; 280 PS) and 318 lb·ft (431 N·m) of torque for the Japanese version. The styling, while modern, does seem to borrow some elements from Toyota's first grand touring sports car, the Toyota 2000GT. For the export model (America/Europe) Toyota upgraded the Supra turbo's engine (smaller, steel wheeled turbochargers, bigger fuel injectors, etc.). This increased the power output to 320 hp (239 kW; 324 PS) at 5600 rpm and 315 lb·ft (427 N·m) at 4000 rpm. Upon launch in 1993, it was the first Toyota-badged vehicle to include a passenger airbag as standard (US-market only).[16] (326 hp / 325lbft for Europe)
The turbocharged variant could achieve 0–60 mph in as low as 4.6 seconds and 1/4-mile (402 m) in 13.1 seconds at 109 mph (175 km/h).[19] The turbo version was tested to reach over 285 km/h (177 mph), but the cars are restricted to just 180 km/h (112 mph) in Japan and 250 km/h (155 mph) elsewhere. European versions of the car also had an air intake or scoop on the hood. Drag coefficient is 0.31 for the naturally aspirated models and 0.32 for the turbo models but unknown with the rear spoiler.
The twin turbos operated in sequential mode, not parallel. Initially, all of the exhaust is routed to the first turbine for reduced lag. This resulted in boost and enhanced torque as early as 1800 rpm, where it already produced 300 lb·ft (410 N·m) of torque. At 3500 rpm, some of the exhaust is routed to the second turbine for a "pre-boost" mode, although none of the compressor output is used by the engine at this point. At 4000 rpm, the second turbo's output is used to augment the first turbo's output. Compared to the parallel mode, sequential mode turbos provide quicker low RPM response and increased high RPM boost. This high RPM boost was also aided with technology originally present in the 7M-GE in the form of the Acoustic Control Induction System (ACIS) which is a way of managing the air compression pulses within the intake piping as to increase power.
For this generation, the Supra received a new six-speed Getrag/Toyota V160 gearbox on the turbo models while the naturally aspirated models made do with a five-speed manual W58, revised from the previous version. Each model was offered with a four-speed automatic with manual shifting mode. All vehicles were equipped with five-spoke aluminium alloy wheels, the naturally aspirated model had 16-inch wheels and the turbo models were 17-inch. The difference in wheel size was to accommodate the larger brakes equipped as standard onto the turbo model, but in Japan were optional extras. Both models had a space saver spare tire on a steel rim to save both space and weight.